It has been over five decades since this film, shown with the above title in Portuguese, was launched! Moreover, “Whatever Happened to Baby Jane?” is now in its first version for the stage. Due to some bureaucratic problems, the theatrical adaptation of this film never took place until now! 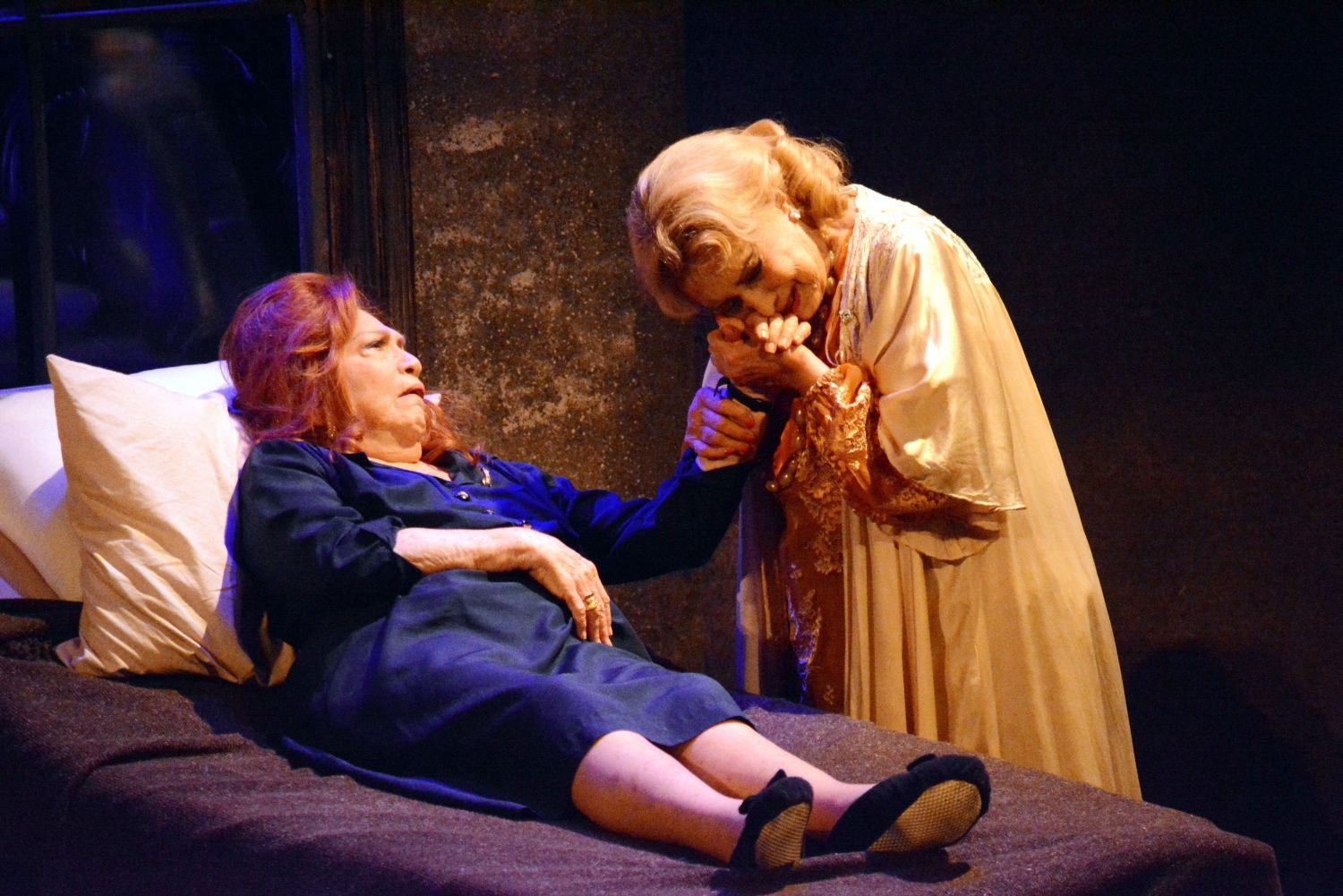 Charles Moeller and Cláudio Botelho, both great admirers of the film itself, had a long wished to be able to bring the story to the theatre. So they were most surprised with the news that, at last, the stage adaptation had been finished! Henry Farrell, the author of the novel that gave rise to the film, dedicated himself to writing the play shortly before dying in 2006. Almost ten years later, the theatre rights were finally authorized by the family, and assigned to the Moeller & Botelho company.

The Brazilian actors in this story about the Hudson sisters (Jane and Blanche), the legendary characters played by Bette Davis and Joan Crawford in the film, are Eva Wilma and Nathalia Timberg. Just to give you a reminder about this classic film’s plot: Jane, a former child vaudeville actress, now has to deal with her own decline in prestige, while her sister Blanche has become a famous Hollywood film star. After a tragic and mysterious accident that put an end to both their careers, they find themselves confined and abandoned in an old mansion, where they share their daily lives, hating each other, both full of grief and resentment. Here I quote George Farquhar (1678- 1707) when he wrote: “I hate all that don’t love me, and slight all that do”.

The theater adaptation entangles what happens in the lives of the two sisters, by mixing past, present and fantasy. The fame of this film is also responsible for numerous stories and backstage disputes, something that lasted for many decades. Rivals in real life, Bette Davis and Joan Crawford had a number of disagreements on the set, something that helped to heat up even further the atmosphere between their characters. It was also the first time that both of them experienced acting in a new kind of film, something between psychological terror and suspense.

Recently, there was also a television series dealing with this rivalry, called “Feud”. I watched some of the episodes, where Susan Sarandon and Jessica Lange played the two sisters. There the rivalry and hate appeared even more than in the film! Fortunately, this is not the case here in Rio: Eva Wilma and Nathalia Timberg are good friends! What is surprising is that this is the first time these two actresses (who each have almost six decades of successful theatre and television work) are together in a play. This applies to the Rio de Janeiro run, as Nathalia has taken over from Nicette Bruno who played the role of Blanche in São Paulo. There both Eva Wilma and Nicette Bruno were indicated as Best Actress in Drama at the “Prêmio Arte Qualidade Brasil”, which Eva Wilma won; another award for these two actresses was the “Melhores do Ano”, when the two of them shared the prize! 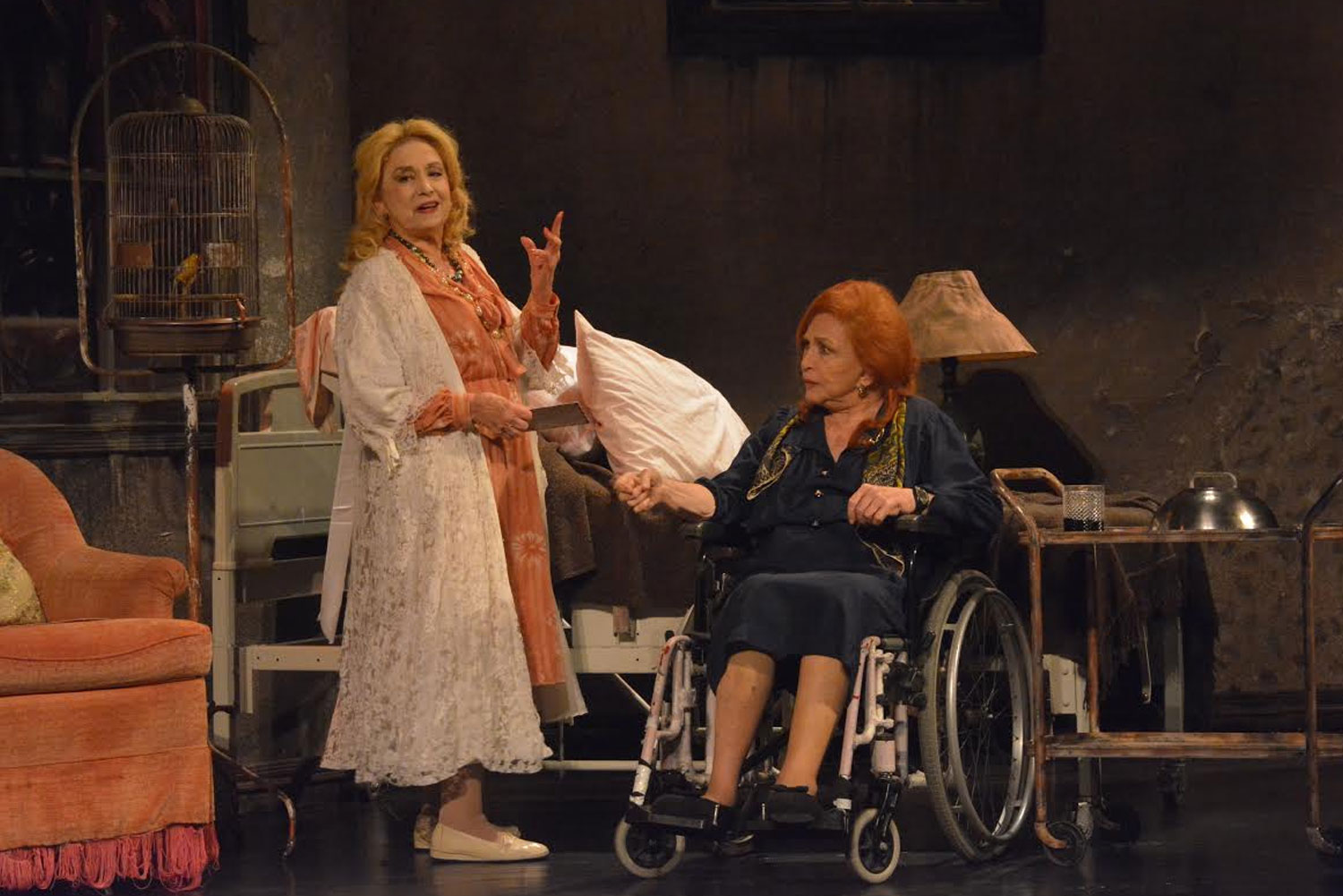 But do not think that Eva Wilma and Nathalia Timberg are alone on stage! As I said before, the play moves from the past to the present, so it shows the sisters both as children and teen-agers, revealing to the audience how they were and how they are in their old age. Children Sophia Valverde, Duda Matte, Alessandra Martins and Ágatha Félix (who play the roles of the sisters on alternative days), plus Paulo Goulart Filho, Teca Pereira, Nedira Campos, Juliana Rolim and Karen Junqueira (the latter as Jane and Blanche, as teen-agers) take the supporting roles in the performance, and add to the excellent supporting cast.

The direction is by Charles Moeller , who also adapted the play, translated by Cláudio Botelho. It is the first time that Moeller and Botelho produce a play that is not a musical – as musicals are something that they are both famous for!

“O Que Terá Acontecido a Baby Jane?” plays at Theatro Net Rio – Sala Tereza Rachel on Rua Siqueira Campos, 143 – sobreloja – Copacabana, at the Shopping Cidade Copacabana. There is paid parking at the shopping center through the Rua Figueiredo Magalhães entrance, and the Metrô station (Siqueira Campos exit) is next door. There are also plenty of taxis outside once the play is over. Performances last for 70 minutes and take place on Thursdays and Sundays at 6pm, Fridays and Saturdays at 9pm. Tickets range from R$ 50 on the upper part of theatre, with only partial views of the stage to R$ 150, at all performances.

The play opened in Rio on April 21, and is scheduled to run until June 25. Although the São Paulo run was longer, from August 2016 to March 2017, and the presentations here will last only two months, it is worth going to see it – and maybe comparing the film to the play!

At this time, I am sorry to tell you that this will be my last article for The Umbrella. Unfortunately, due to the economic crisis that is affecting everybody in Brazil this excellent communication has been forced to discontinue publication. I find it sad to wave “goodbye” after five years of regular monthly contributions—some of you may remember that my first article was printed in July, 2012! During these five years, I have never missed a single month, and I believe I gave you a panorama of interesting plays staged in Rio de Janeiro, showing you musicals to comedies to straight plays, plus some summaries of what had happened during the year.

I certainly hope that things will improve sometime in the future, and that I will be able to start writing again on this old and wonderful art called theatre. At this time, I extend my thanks to the different Umbrella Editors, Jack Woodall, Chris Hieatt and Michael Royster who, during these five years, have always been very helpful in my work! And finally, my thanks also go to all of you who have read my articles and, hopefully, enjoyed what I wrote!

Ewa Procter is a writer and a theatre translator, and Vice-President of the Instituto Cultural Chiquinha Gonzaga.